Autoglym Ultra HD Wax has been around for a while now, but recently the price has came down considerably to a point that it is much more appealing to detailers.

Autoglym are well known for their excellent product range, so with that, it’s important to take a look at their Ultra High Definition Wax. I’ve been using this for the better part of six months before writing this review to ensure that the results obtained lasted well.

UHD Wax is exceptionally easy to use. It’s a softer paste wax in comparison to say Collinite 476S which is a tough paste wax. In the kit, there is the tub of wax itself, as well as a high quality applicator pad. The pad has a nice ergonomic grip to it meaning that you can grab it in your hand when applying the product. In addition to this, there is also an Autoglym red buffing cloth. This is super soft, even after numerous washes.

In terms of applying the wax, I’ve found that it’s best to spritz a small amount of water onto it from a spray bottle in order to lightly mist the applicator pad. After that, it’s really just the case of putting the pad into the tub, giving it half a turn in order to load it up. The important part with this though is to ensure that it is applied thinly and evenly. There is not benefit adding a massive blob of wax to the paint.

When applying the wax, I followed the directions by doing overlapping circular motions (much like they suggest with their Super Resin Polish). By doing this, it means that the coverage is even. I found that one half turn was enough to do half of the bonnet on my car. Whilst the tub does appear to be small, since only a minimal amount of wax is needed, this really does last a long time. The first time I applied it, it was actually a really hot, sunny day (which is usually a no-no when it comes to applying waxes). It did flash rather quickly, but by ensuring that as soon as it flashed that it was removed, the supplied microfibre cloth made quick work of the removal process.

As mentioned, I’ve waited a while before giving my results on this one. My car is what Renault class as ‘Artic White’. The gloss from this was nothing short of exceptional with this wax. In the past I’ve tried Collinite 845 on the paintwork. It did leave nice results, but for the extra money in the Autoglym UHD Wax, it was well worth the price increase. It looked fresh, almost as if it had just rolled out of the factory.

Once the wax was applied the first time, it was actually pouring down with rain the following day. The beading that was produced was super tight, more so than any other wax or sealant I’ve used in recent years. Previously one of my main products for long term protection was Extra Gloss Protection from Autoglym. The gloss from that and the protection is brilliant. However, when you need to wait at least an hour for it to cure, it is a huge downside.  When it came time to cleaning the car, it was effortless and the wax is super hydrophobic.

A white car shows up even the lightest specs of dirt, but by having the UHD wax on the paintwork, it made quick work of cleaning the car. Since the majority of the dirt won’t stick to it, I was able to get the car washed in under 15 minutes. That was with the Autoglym UHD Car Shampoo (which can be bought as part of a kit with this wax). However, Autoglym Pure Shampoo also does a great job of getting the car looking great in no time with this wax.

So the wax lasted for 4 months before I saw signs of it starting to wane a bit. Given that winter was around the corner, I stripped the remaining wax in order to see the car through the winter. One thing I did change was adding a layer of Super Resin Polish to the paintwork first. Autoglym do recommend this step, but I skipped this the first time around since I wanted to see how well the wax would last. I’ve got no doubt it would last for over 6 months on it’s own. However, it can be tough for me to get a good time to apply more wax since I don’t have a garage, so I made the conscience effort to apply more to see me through the winter months.

In addition to adding the Super Resin Polish, I put on two coats of the UHD Wax. I waited 24 hours between the first and the second coat which is pretty common practice when it comes to layering any product. Two months in so far and the results are extremely impressive. This is important when considering that the amount of salt and grit on the roads to make sure that the roads is safe to drive on. The salt and grit can be extremely corrosive, so it’s important to make sure that the car is properly protected. I also as a precaution also used the same application process for the door jambs as well since these can be susceptible to a build up of water and ice.

As expected, the salt and road grit comes off of the car effortlessly, even with just a pressure washer without the use of any shampoo. A handy hint for those that don’t have time for a full on wash during the winter (or don’t have access to a hose during this time for whatever reason), is to use Autoglym Magma. I’ve chose Magma in this example since it was developed with other Autoglym products in mind, so there won’t be any detrimental impact to the wax.

The process for a quick wash would be to rinse off the car, apply Magma to the paint work and let it dwell. After five minutes, it will have broken down the contaminants (not just iron), and then rinse it off. It’s a quick way to have a contactless wash. It isn’t by any means going to top a contact wash, but it is a great way to get a lot of the dirt off of the car when you’re in a pinch. I’ve tried this method before with other waxes on the paint, and the results were lacking. It’s clear that the protection from the UHD as well as the cleaning power of the pH neutral Magma are working in tandem to provide this result. 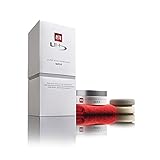 Product Description: Autoglym UHD Wax is a brilliant performer, and one of the best in the market.

Autoglym Ultra HD Wax is a brilliant addition to the Autoglym range. At this price point, you won’t get a better wax in terms of durability, ease of use and also longevity.

Last update on 2021-02-25 / Affiliate links / Images from Amazon Product Advertising API As an Amazon Associate I earn from qualifying purchases.